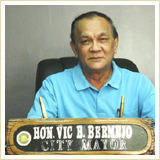 MANILA, Philippines — For buying a vehicle and preparing check payment under his name, a former  Capiz Governor Vicente Bermejo  is charged with graft.

The records of the Ombudsman shows Bermejo purchased  through public auction  four vehicles in 2007  amounting to P1.95million and registered the same under the name of the Provincial government.

But the Ombudsman investigators found out that the purchase did not observe the government’s bidding procedures, worse the check payment was made payable to Bermejo “as reimbursement’.

Documents obtained by the Office of the Ombudsman  showed that the provincial government acquired three Pajero wagons and one Isuzu Manlift truck for the total amount of P1.95million. Three of the four vehicles were given to the Roxas City government and the Panay municipal government.

It was also discovered  that records   from the Land Transportation Office showed that the certificates of registration for the two units of 1994 Mitsubishi Pajero wagon and one unit 1990 Elf truck were all dated 15 August 2007 and were registered under the name of the Roxas City government.

Bermejo  was given the chance to answer the complaint but he failed to file any counter-affidavit during the investigation.

Investigation ascertained that the vehicles were purchased by Bermejo by participating and being the highest bidder in a public auction held by the Phil-Pan Subic Ventures, Inc.

“The practice of making purchases in a public auction is not among the modes of procurement allowed under R.A. No. 9184,” said the Ombudsman.

Ombudsman  Conchita Carpio-Morales stated “Bermejo as the approving authority of the purchases being the head of the procuring entity, acted with evident bad faith in purchasing the vehicles without a public bidding but through a public auction.   Respondent ought to know the basic provisions of R.A. No. 9184 which require procurement to undergo either competitive bidding or any of the alternative modes and to implement the law to the letter. Yet, respondent utterly disregarded these established rules.”

Morales added “The fact that the check intended for the payment of the vehicles is issued in respondent’s name would further show the irregularity in the purchase.  There is nothing in the records to justify why the check was not made directly to the seller.” -Harold V. Pongtongan/Newsline.ph